Do you know your known knowns?: A Reflection from BookMachine's 5th Birthday

As Assistant Production Editor at emc design, one part of my job that I really enjoy is attending events within the publishing industry. My first blog post is inspired by the BookMachine talk we attended in London in September. 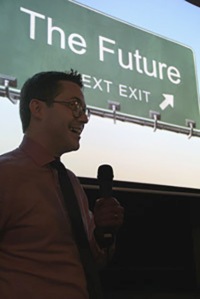 George Walkley at BookMachine: The Next Five Years of Publishing. Credit: Sam Perkins

BookMachine celebrated their fifth birthday by taking a look at the next five years in the publishing industry. What will publishing look like in 2020? George Walkley’s talk in London taught us that no one really knows the answer to that question, but we can make judgements and assumptions based on what we do know. The full impact of digital technology on the future of the publishing industry may be an unknown known, and publishers are generally moving slowly to adapt to it, but how has it influenced our reading experience already?

In my opinion, some of the most interesting and innovative ideas haven’t come from the technological advances themselves. Technology has enhanced our reading experience and consequently challenged publishers to develop creative and entertaining ways to delight a new generation of readers. Some of the most exciting ways publishers have done this is not through the (sole) use of digital technology itself, but how digital technology is used to make print books more exciting.

Two books in particular, Night Film by Marisha Pessl and S. by JJ Abrams and Doug Dourst, show different approaches publishers are taking when faced with this need to make use of new technology.

Night Film actively uses multimedia to enhance the content and submerse the reader within the narrative world. It tells of disgraced journalist Scott McGrath’s attempts to uncover the truth behind the death of Ashley Cordova, daughter of the mysterious filmmaker Stanislas Cordova. Cordova’s films are so horrific they have been banned from mainstream cinemas and are said to haunt the viewers forever afterward. This horror permeates the rest of the book and adds a note of urgency to finding out what happened to Cordova’s daughter.

This kind of noir thriller lends itself to a multimedia format and the publisher, Windmill Books (an imprint of Penguin Random House), exploits that to great effect. The print book tells the story through articles, websites, forums, audio scripts of interviews and profiles, all gathered by McGrath. Alongside the visual appearance of the print book, an app gives access to further material, both written and visual, creating another dimension of this fictional world. Night Film works with technology to create an immersive experience but it does not depend on it to tell the story. In fact, for me, the reading experience seems almost to be diminished on digital devices as the visuals are not easily viewed and the multimedia aspect is lost. In this case, technology has enhanced the print book, to a certain extent, without taking over completely.

S. conceived by JJ Abrams and written by Doug Dorst, takes a different approach when faced with technological advances. Rather than use technology or present an enhanced digital book, publisher Canongate Books takes a step back in time with S., publishing it as a folio hardback (practically unheard of nowadays). S. is the story of two people who interact in notes in the margin of a book written by the mysterious V M Straka. The urgent search for the real identity of Straka is at the heart of this narrative.

Like Night Film, S. has extra content, mostly in the form of physical maps, postcards and other surprises. The physical book itself is a visual to immerse the reader in the world of these characters. While Canongate Books frequently use multimedia to promote their books, in this case they have eschewed it because S. simply doesn’t need technology to enhance it. In a very real way, S. is a reaction to technology. When faced with the option Canongate enhance the print product with excellent design and physical extras rather than use apps, QR codes or any other form of technology. While S. would have been possible before smart technology, publishers had little need to push themselves or their budgets to such an extent to draw attention to the written word.

These approaches show a small sampling of how the industry is adapting to the new challenges we face today. While many talk of subscription models and mass digital consumption of reading when referring to our technological future, I am finding that the most exciting use of technology is how it pushes publishers to enhance print books. Multimedia content is a natural way to view content in today’s world and already used by other sectors of the industry. For example, ELT and Education publishers have used multimedia to enhance learning for over twenty years through audio exercises and visuals. By applying these techniques to the trade sector the storytelling experience can become truly immersive. While this model isn’t sustainable for every book, it would be nice to see more publishers using multimedia in their books. I look forward to what the next five years will produce if we can continue to explore these possibilities.